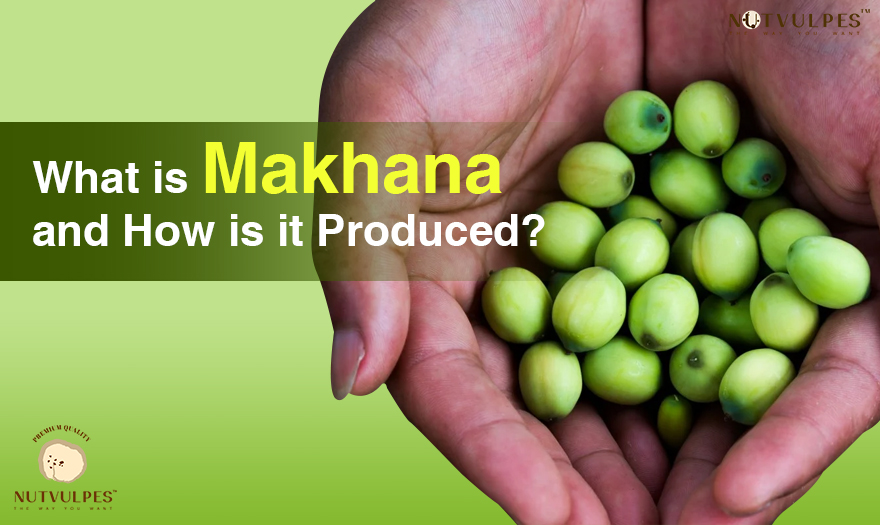 WHAT IS MAKHANA AND HOW IS IT PRODUCED?

Evenings have always been a time when we develop an intense urge to binge on something light and delicious. We have often been served a bowl of popcorn-like nuts called Makhanas. Our mothers would roast them and salt them, then gladly give us a healthy snack to munch on. So, what are these makhanas anyway? And where do they come from? We might be snacking on them quite gleefully without having the faintest idea of what they really are.

Makhana is a perennial plant that grows in water. It has a huge, round leaf that measures up to 3 metres in diameter which floats on the surface and has a leaf stalk centrally attached to the bottom of the leaf. While the upper part of the leaves is a bright green, the lower part is a darkish purple. The leaves are quilted, and the one which float has prickles on them while the remainder of the leaves remains submerged.  The plant produces bright purple flowers on the surface containing tiny thorns. This prickly water lily grows densely in lakes, ponds, and wetlands, supported by dry hot summers and cold winters. Extensive makhana farming is being done in various parts of Bihar, India.

The plant produces starchy seeds which are edible as makhana dry fruit and can be eaten raw or cooked. It is very commonly used in Indian sweets or is roasted and spiced before consumption. It is a very popular and healthy snack that serves as a delicious alternative to all the greasy snack s out there. You can make various types of makhana dishes like a curry or raita and can be treated as both a savoury or sweet dish.

Makhanas are considered to be edible only are being processed and are highly nutritious. The Mallah community is the main Fox Nut manufacturer in Bihar and is responsible for the collecting, harvesting and makhana processing.

HOW ARE THEY COLLECTED?

The collection of makhana is a very labour extensive method and requires the involvement of abundant skilled labours. The usual period of harvesting lasts between 10 a.m. to 3 p.m. which involves about 4 to 5 hours of time devoted to the people diving at the bottom of the river or pond to collect the seeds. It is often collected by dragging a bamboo pole attached with a cloth to collect the lotus seeds with their hands. The collected seeds are then washed thoroughly to be rinsed off from mud and grime.

HOW DO YOU WASH AND STORE THEM?

All the seeds that have now been collected are transferred to a crescent-shaped basket called the gaanja, which is suspended on the surface of the water. The basket is then thoroughly shaken and motioned repeatedly on water such that all seeds are cleaned up.  The seeds are then segregated into bates and rolled on the floor in a container which in turn makes the surface of these nuts smooth and gives them an even texture. The seeds are then kept overnight inside huts and then the following day, female workers spend time spreading the seeds over mats by hand to let them dry for about 3 – 4 hours.

These dried makhanas don’t have a really long shelf life. They need to be fried or roasted immediately after being collected or they start to get spoilt. After frying the seeds, they are stored in a long bamboo container and tightly covered with cow dung. The container is then covered with a piece of cloth to maintain a certain temperature. After they have rested, the makhanas need to be fried once again and the entire process is repeated. When they are finally done, they are left to cool off on a wooden plate.

The seeds are then continuously stirred in an extremely heated cast iron pan for approximately 6 minutes or until there is a faint crackling sound. As soon as the crackling is hard, the seeds are taken out and kept on a hard, rough surface and are hammered with a wooden mallet.

The mechanism which is involved in releasing the pressure from within the seeds makes the seed coat break off completely after it is hammered and the kernel inside pops out expanding in form. This soft part of the kernel is the edible portion called the makhana. After the kernels have popped the makhana is immediately polished by rubbing them against bamboo baskets to avoid any absorption of moisture.

Makhana has several unique properties that are not only beneficial to the human body but also serve as a great alternative to the unhealthy snacks that can be had at any time during the day. Even after being so beneficial, people lack information about the Makhana Producer in India. Consumers need to be made aware of what is needed in order to buy Makhana Online or from Makhana Wholesale Sellers. This crop has great potential and needs our immediate focus.

NUTVULPES are one of the biggest Makhana Wholesale Seller in India. You can Buy Makhana Online from NUTVULPES or from anu local Fox Nut Wholesale Supplier. Once you turn makhanas into a habit, there’s no turning back from a healthier approach to life.

Connect with other Nutvulpes Lovers